The dangers of overfitting: a Kaggle postmortem

Over the last month and a half, the Online Privacy Foundation hosted a Kaggle competition, in which competitors attempted to predict the psychopathy levels of Twitter users. The bigger goal here is to learn how much of our personality is actually revealed through services like Twitter, and by hosting on Kaggle, the Online Privacy Foundation can sit back and watch competitors squeeze every bit of information out of the data.

Competitors can submit two sets of predictions each day, and each submission is scored from 0 (worst) to 1 (best) using a metric known as average precision. Essentially, a submission that predicts the correct ranking of psychopathy scores across all Twitter accounts will receive an average precision score of 1.

I held this spot for the last week and felt confident that I would maintain a decent spot on the private, or true, leaderboard. Soon after the competition closed, the private leaderboard was revealed. Here’s what I saw at the top:

Somehow I managed to fall from 2nd all the way down to 52nd! I wasn’t the only one who took a big fall: the top five users on the public leaderboard ended up in 64th, 52nd, 58th, 16th, and 57th on the private leaderboard, respectively. I even placed below the random forest benchmark, a solution publicly available from the start of the competition.

After getting over the initial shock of dropping 50 places, I began sifting through the ashes to figure out what went so wrong. I think those with more experience already know, but one clue is in the screenshot of the pack leaders on the public leaderboard. Notice that the top five users, including myself, have a lot of submissions. For context, the median number of submissions in this contest was six. Contrast this with the (real) leaders on the private leaderboard – most have less than 12 submissions. Below, I’ve plotted the number of entries from each user against their final standing on the public and private leaderboards and added a trend line to each plot. 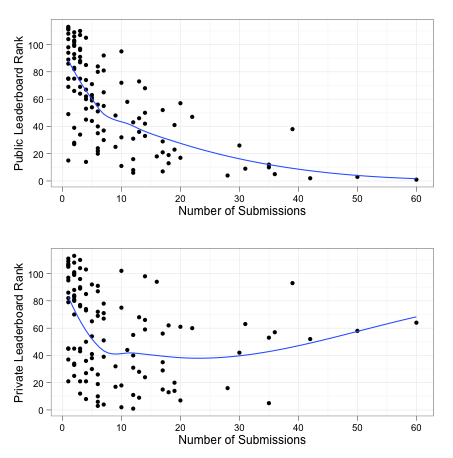 Overfitting the public leaderboard is not unheard of, and I knew that it was a possibility all along. So why did I continue to hammer away at competition with so many submissions, knowing that I could be slowly overfitting to the leaderboard? 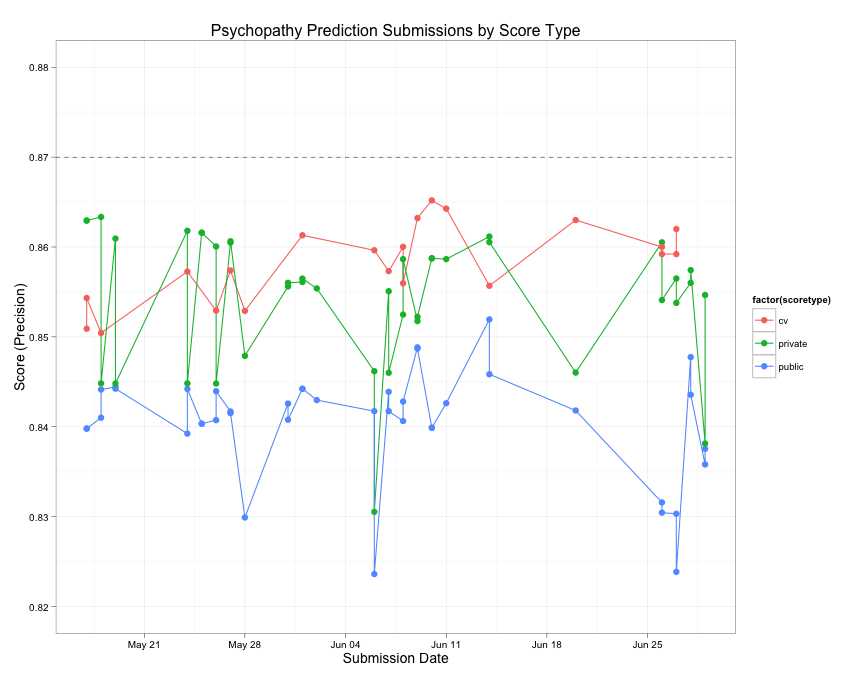 There are a few things worth pointing out here:

Below, I’ve replaced the choppy lines with smoothed lines to show the general trends. 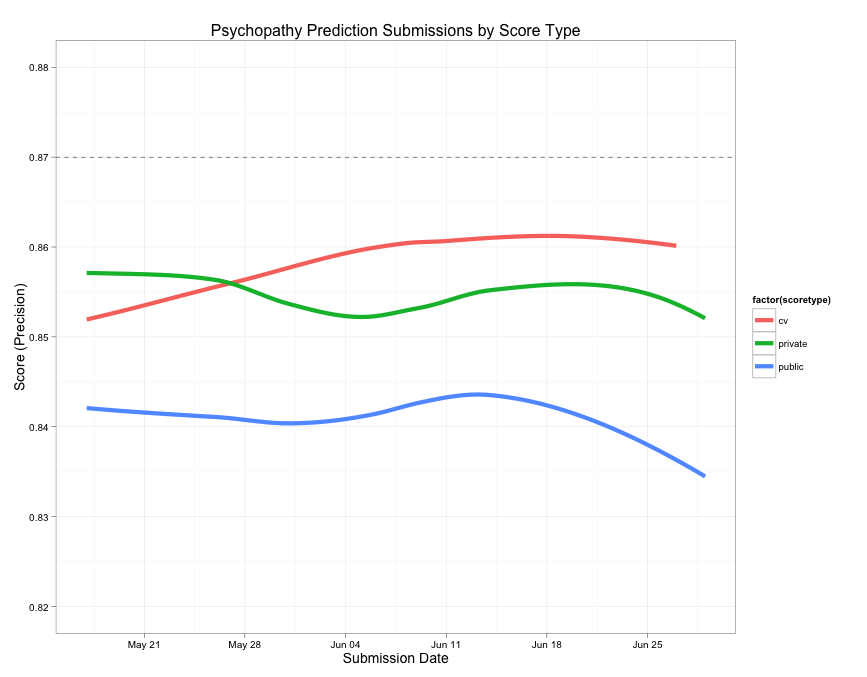 An alternate plot of the submission scores over time using smoothers to depict some general trends. 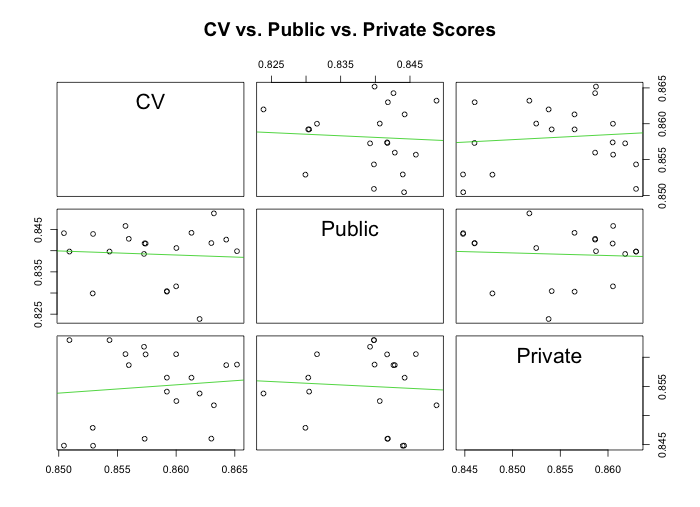 The scatterplots tell a different story. It turned out that my cross-validation estimates were not related to the private scores at all (notice the horizontal linear trends in those scatterplots), and the public leaderboard wasn’t any better. I already guessed that the public leaderboard would be a poor estimate of the true score, but why didn’t cross-validation do any better?

I suspect this is because as the competition went on, I began to use much more feature selection and preprocessing. However, I made the classic mistake in my cross-validation method by not including this in the cross-validation folds (for more on this mistake, see this short description or section 7.10.2 in The Elements of Statistical Learning). This lead to increasingly optimistic cross-validation estimates. I should have known better, but under such uncertainty, I fooled myself into accepting the most self-serving description of my current state. Even worse, I knew not to trust the public leaderboard, but when I started to edge towards to the top, I began to trust it again!

In the end, my slow climb up the leaderboard was due mostly to luck. I chose my five final submissions based on cross-validation estimates, which turned out to be a poor predictor of true score. Ultimately, I did not include my best submissions in the final five, which would have brought me up to 33rd place – not all that much better than 52nd. All said, this was my most educational Kaggle contest yet. Here are some things I’ll take into the next contest:

One of my best submissions (average precision = .86294) was actually one of my own benchmarks that took very little thought. By stacking this with two other models (random forests and elastic net), I was able to get it up to .86334 (edit: and yes, those tiny little increases actually make a difference on the leaderboard!). Since the single model is pretty simple, I’ve included the code. After imputing missing values in the training and test set with medians, I used the gbm package in R to fit a boosting model using every column in the data as predictor. The hyperparameters were not tuned at all, just some reasonable starting values. I used the internal cross-validation feature of gbm to choose the number of trees. The full code from start to finish is below:

An earlier verison of this post appeared on Kaggle’s blog: No Free Hunch here